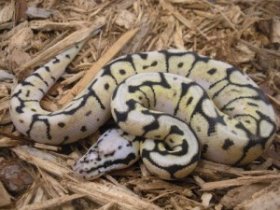 Successfully breed as early as 12 weeks of age! Yes, you read that correctly I’ve bred 3 month old male ball pythons on more than on occasion. As great as this gene is as a combo animal as well as it’s excellent feeding and breeding history there is a downside to this gene. Well, maybe not a downside, but it’s an imperfection so to speak and that’s the wobble.

I often get asked about the “wobble” as it relates to the spider ball python gene. The term “wobble” was coined when ball python breeders who produced spider ball pythons noticed that they seemed to “wobble” their heads when excited/stressed in some extreme cases they would even spin upside-down and just flat out act goofy. It’s thought to be a neurological issue that is some how connected to the spider gene. Nobody knows for sure what causes this particular behavior and I until someone is willing to put down some serious money to have it researched in debt we’ll probably never know. Allow me to answer some of the most frequently asked questions I get regarding the wobble. Keep in mind; these answered are based on my own personal experience working with the gene and nothing else.

Was the “wobble” caused from inbreeding? In my opinion, absolutely not, especially being that the spider gene is a dominate gene. Being that the gene is dominate means that line breeding isn’t necessary in order to reproduce the mutation so breeding spider ball pythons to normal non-gene carrying ball pythons has worked to out crossed spiders right out of the gate.


Do all spiders have the “wobble”? Again, in my opinion and experience working with the gene, my answer is yes, they all do. Now, with that being said, some spiders hardly have any “wobble” at all with it barely being noticeable, while other spiders may have more severe cases.

Can the “wobble” be minimized? Yes. I believe it can be minimized through incubation temperatures. Incubation temperatures seem to be critical for determining what degree spider ball pythons will “wobble”. I’ve produced very few “wobblers” that showed extreme symptoms like spinning upside-down and such and it just some happens for those few animals a temperature spike in the incubator did occur. Starting back in the 2010 breeding season I began incubating all my ball python eggs at 86-87 degrees which appears to have minimized the “wobble” to where it’s hardly noticeable.