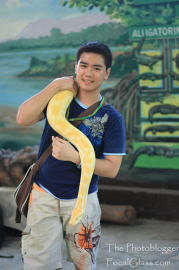 Having gone to crocolandia in Talisay along with SoloflightED, CebuRoadtrip and MaldeetuhRamblings, we had the rare opportunity, to hold, feel, and hug the huge Albino Burmese Python!

I am an animal lover and I love almost all types of animals (prize if you can guess the complete list of animals I dislike ) Large snakes are no exception. The bigger they are the better

The Albino Burmese Python is one of the prized collections of the zoo. They have two of them but only one was allowed to be brought out because the other one was molting. You must NEVER disturb a snake in molting. 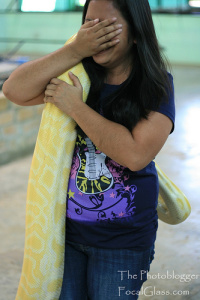 The Boa and Python Difference

So what’s the difference between a Boa and a Python? 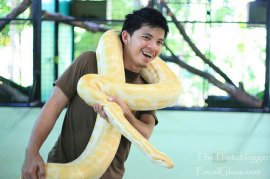 Lastly what people should know that these huge snakes are not venomous but then again their oral cavities are still filled with bacteria and if you do get bitten then this can cause an infection. Snakes are generally peaceful creatures and if you happen to be bigger than it is then it’s generally safe to assume that it’s more scared of you…usually.

And here are some more photos of the nice friendly python who was patient enough to put up with our tomfoolery observation and appreciation of it in action.

Thanks again to Doi, Ed, and Audrey for accompanying the lonely Photoblogger to one of his random adventures Till next time guys

A photoblogger in his twenties, Johnn’s advocacy is to share photos to the world. He loves freediving, birding, reading, eating, travelling and meeting new people. He is usually game for anything new and interesting. You can follow him on Twitter: @Photoblogger