Facts about the Burmese python

Creature Feature: Burmese Pythons Prowl the Everglades, and That’s Not a Good Thing 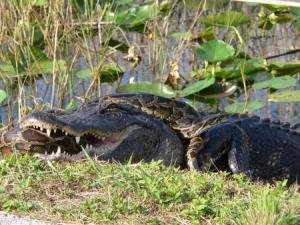 Breeding populations of Burmese pythons have been established in extensive areas of Florida. In vulnerable places like Everglades National Park, limiting the growth and spread of this ecologically disruptive and potentially dangerous invader will be a very daunting task.

The Burmese python (Python molurus bivittatus) is a large constrictor native to the rain forests of Southeast Asia. Because it’s got attractively patterned skin, has a generally docile disposition, and is fairly inexpensive to purchase (about $70), it’s been imported in fairly large numbers here in the United States. It is thought that there are at least 5, 000 pet pythons in Florida alone.

Pythons can be difficult to manage in captivity, especially if they are large and poorly kept. Over the years, many of these pet pythons have escaped or been intentionally released into the wild by owners who no longer want them.

Breeding populations have been established in the wild in Everglades National Park and are thought to exists in various other parts of Florida as well. Florida's warm climate is similar to the one that this rain forest species was designed by nature to inhabit.

However, unless we do something to prevent it, it’s only a matter of time before all of these things will be true in at least one-third of the 48-state U.S. They are already true in parts of Florida, including Everglades National Park.

There is a good reason to be concerned about Burmese pythons living in the wild here in America.

The Burmese python is an impressive animal, and that is an understatement by several orders of magnitude. The Burmese python is the world’s sixth-biggest snake species. A python continues to grow all of its life, and it’s not unusual for a fully mature Burmese to weigh 150 pounds and stretch 16 to 18 feet in length. The largest ones on record are much bigger than that.

A captive Burmese python living at the Serpent Safari Park in Gurnee, Illinois, is the largest living snake on record. Tagged with the unlikely name “Baby, ” this enormous reptile is 27 feet long and weighs just over 400 pounds. (If you’ve got a tape measure that will reach all the way out to 27 feet, run it out there and see if that doesn’t make you glad that damn thing isn’t on the loose!)

The Burmese python is not just fast growing and long-lived (typically 20 years or so in the wild), it’s also an efficient predator. And as they get bigger these snakes gain the ability to take down and eat ever larger animals. A good-sized python can kill a water bird, a piglet, a fawn, a raccoon, a bobcat, a dog, a child. A whopper is as big around as a telephone pole and can kill and eat a pig, a goat, a deer, a good-sized alligator, a man.

Pythons kill by constriction. In practical terms, this means that they bite their victim and hang on with their sharp, backward-facing teeth while they coil their powerful bodies around the animal and squeeze it until it dies from suffocation.

It’s a bad way to go. Every time the victim exhales, the snake takes up the slack, preventing the intake of a full breath. There is no escape.

Save the Burmese Pythons of Bangladesh