There are Four Main Races of GTP's which are :

Aru Island lies off the south west coast of New Guinea. The animals from here are reported to be the less aggressive than the others. A typical looking Aru will have a shorter blunter tail and average sized head, its body having white spots on the dorsal in clusters or individually and a blue pigment fading into green on its underside, they are also typically yellow as babies.

Biak Island is further North, closer to the Equator. These Animals are reported to be the more aggressive and are also the largest of the Chondro family. A typical Biak has a larger head and some yellow markings on either its head or body or both, they also undergo their colour change later in most cases than others and are typically reddish brown as babies. 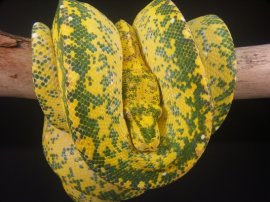 Sarong is a costal city at the western tip of New Guinea and is where Chondros have been exported from after collection on the mainland. Jayapura is a city in the North of New Guinea and is also a place where Chondros have been exported from. These Chondros typically have a blue dorsal stripe, black or dark blue tail which is longer and more pointed, smaller heads, shorter noses and are the smaller of the Chondro races.

Merauke is at the southern tip of New Guinea and was once geographically connected to Cape York Australia over 200 million years ago. This race is similar to the Aru race but typically has a white stripe on its dorsal connected by single scales. 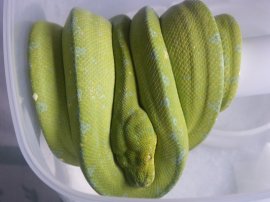 They are also the rarer of the Chondro races as exporting from Australia is very hard if not impossible due to strict wildlife restrictions.

There has been alot of discussion about the Kafiau Island race of Chondros which are also know as Canary Chondros. This Island lies in the middle of Dampir Waigeo Straits and is about 1.5 hours to reach by motor boat from Sorong town. The Chondros from this locality have been reported to stay yellow with the odd white scale here and there, but little is know about this "new race" and information is slowly circulating. Updates will be posted when info becomes available.

There are several other localities where Chondros may have been collected from and are not so widely recognized, if at all true individual races. Some of these I will list here : Wamena, Lereh, Bokondini, Karubaga.

Female Aru Green Tree Python in the morning on September ...