Is this Australia's biggest ever brown snake? 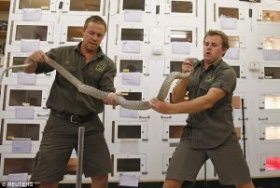 Gigantor, a deadly Australian Eastern brown snake, is prepared to be measured and milked for it's venom by handlers Tim Faulkner and Billy Collett

The average Eastern brown snake is 1.5metres long and weighs 700g. Gigantor's venom yield is said to yield an insane 30mg per milking, compared to a normal Eastern brown which produces 11-12mg.

Giagantor is the biggest Eastern brown ever seen at the Australian Reptile Park and will play an important part in the park's life-saving venom milking program. 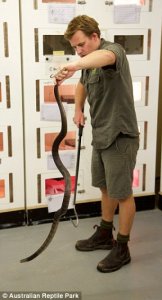 However it is believed that they can grow up to 2.4 metres in length.

The museum said the snakes 'seem to prefer open landscapes such as woodlands, scrublands, and savannah grassland, ' They said they are frequently found in many large towns and cities. 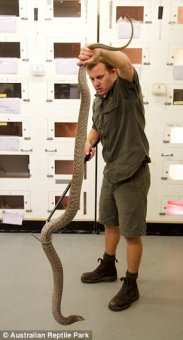 The park's general manager, Tim Faulkner urged caution at this time of year, claiming brown snakes thrive in the type of weather we have been experiencing in Sydney.

'He's well over the average size of an average Eastern brown, with twice the girth – that's one big snake' Tim said.

'It's the height of summer – a humid summer – which snakes love. Mix that with the rain we're experiencing and you're more likely to see them out and about' he said.

Eastern brown snakes are the second deadliest in Australia after the Inland taipan.Their fangs are very small (about 3mm long), but their venom contains potent neurotoxins and pro-coagulants, which cause progressive paralysis and incoagulable blood.

Eastern brown snakes are commonly found in mainland Australia and are the most common cause of snake bite deaths in Australia. They can vary from very pale brown to reddish or almost black in colour

Eastern brown snakes are commonly found in mainland Australia and are the most common cause of snake bite deaths in Australia. They can vary from very pale brown to reddish or almost black in colour.

More than 200 snakes are 'milked' fortnightly to provide venom to companies who then produce snake anti-venom. 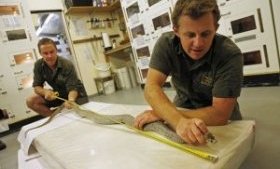 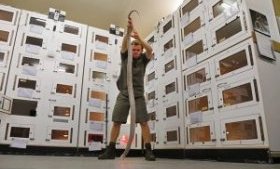 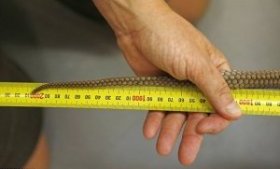 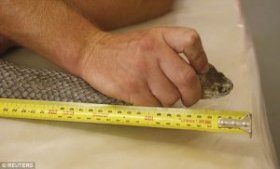 Biggest snake ever caught on tape

@WSOP #POKER: WSOP kelvinkttang serious? buyin helps bring in new players but when its the largest tour. in the history u go and snake the pay out. #no Mon, 1 June 2015 02:06 AM

@Stephen Santonia: After one day of being bored and having nothing better to do I've decided I want to travel the world to look for the world's largest snake. Mon, 1 June 2015 05:34 AM