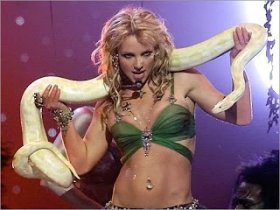 Yes, I am a sucker for snakes just as much as I am for worms. Some people would say that they're related - a few cultures believe that worms are related to dragons, thus leading to the term 'wyrm' for describing both creatures. The same case applies to snakes; 'wyvern, ' 'dragon, ' 'naga, ' and even the oriental 'Orochi' are all directly related to words for snake. The word 'python' comes directly from the particular serpent slain by Apollo at Delphi in Greco-Roman mythology.

Why this python, then? Why not the giant yellow snake that appears on stage and in classroom presentations all the time? Yes, those are totally different snake species, but does it really matter? Won't they both eat puppies, kitties, and other cute furry things when all is said and done?

Surely, if Britney Spears can handle a giant python, anyone can do it...right?

Well, first off, don't get reticulated pythons (P. reticulatus) mixed up with Burmese pythons (P. molurus bivittatus). Both are Asian pythons that grow to considerable size, have similar dietary requirements, and have been featured in the news (often misrepresented) numerous times. Although they have similar range, diets, and get massive, woe to the poor soul who does not do his or her homework!

Like I said, both of these python species grow HUGE. Retics, however, grow bigger; a female Burm usually caps out at around 20 feet, but a retic may well get around 30 (making them the longest snakes in the world)! Retics are also far more inquisitive snakes than Burmese pythons, and have a reputation for being aggressive. This statement was made before the advent of the tiger morph, which, while not staying any smaller, seemed to be less mean than the normal retics. (Plus, it was a co-dominant trait, which encouraged breeding projects - a co-dominant trait usually shows up in 50% of the first clutch.) 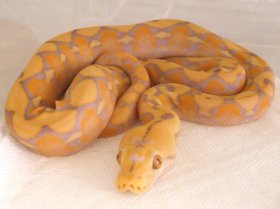 Reticulated pythons one of the few snakes reported to eat people on a semi-regular basis. They are not, however, venomous or nearly as dangerous as some news reporters would lead you to believe. They can make fine pets in the hands of a competent handler, but as many of you have noticed, stupid people out-breed smart people by a considerable margin. Maybe this is Darwin at work.

So, if they're so deadly, why do people breed them to begin with? They are indeed very intelligent snakes, and just about the only species to exhibit instincts that one would normally associate with mammals. (For those curious, the Russian rat snake seems to be another personable species.) The most celebrated among these is the retic's ability to recognize its owner within a crowd of people. Some breeders have also reported a homing instinct in their retics - that is, they will return to their cage if set free. These snakes could be amazing pets a few years down the road. There are several dwarf retic strains that are considerably smaller than the monstrous, man-eating snakes that jump to many a mind at the word 'python.'