What Is a Reticulated Python?

Reticulated python in our garden 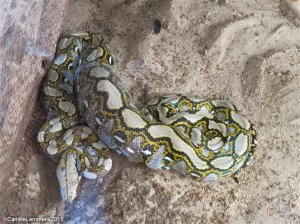 My fear level is still there but not anymore at 'a good snake is a dead snake' level.

Over the last couple of weeks, we had our three hens in our garden disappear and we suspected that we had a big snake in our garden.

Caught! Can you see the rooster sitting inside the snake?

This morning whilst walking next to the pen, the two roosters that were left were very quiet, so my wife peeked inside and saw a big snake curled up inside! We found the culprit and caught it red handed. One of the two roosters was inside the snake and it was sleeping and/or digesting our rooster.

All stretched out, coming in at about 2 meters, small for a python, probably a juvenile

A Thai guy lives across the road from our house, who works at a snake farm in our hood and he was called in to catch our python and have it on display at the snake farm for the Korean tourists during their island tours. 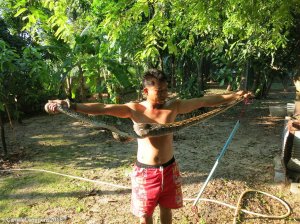 He took in the situation and figured out what to do next. With two very simple tools, including a rope and a blue pvc pipe, he constructed the 'snake catch' tool and within moments he caught the dozing snake. It looked so easy but I wouldn't want to do it myself!

Once caught, the snake was put into a bag, the bag tied up and the snake is on it's way into a new glass cage living house, entertaining Korean tourists. No more eating our hens and roosters! The garden is clean again, so it's time for us to get some new hens! 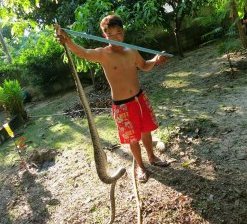 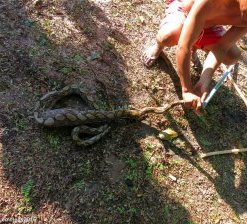