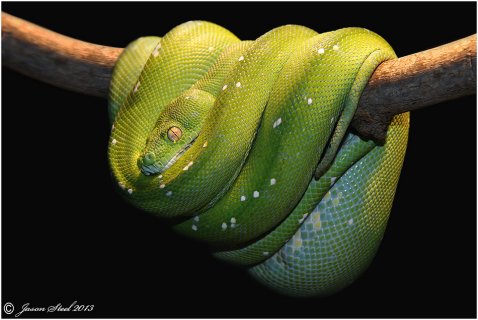 Natural History
Ball pythons (Python regius) are found at the edges of the forest lands of Central and Western Africa. They are equally comfortable on the ground and in trees. They are crepuscular, active around dawn and dusk. Called royal pythons in Europe, here in the United States we call them "balls" due to their habit of curling themselves up into a tight ball when they are nervous, their heads pulled firmly into the center. Like most pythons, ball pythons are curious and gentle snakes.

Ball pythons, like all pythons and boas, devour a variety of prey in the wild - amphibians, lizards, other snakes, birds and small mammals. They do not eat mice in the wild, however, and do not recognize the mice we offer them as being something edible. Thus, imported wild-caught ball pythons tend to be very picky eaters, at least initially, and drive their owners to distraction in their attempts to get them to eat something.

Ball pythons are reputed to be able to go for extended periods of time without food; wild-caught ball pythons have gone for a year or more without food until finally enticed to eat lizards and other snakes. This is not a healthy trait and must not be a reason for selecting this species. This should also make you suspicious when a pet store tells you that their ball pythons are eating well.

Buying captive-born ball pythons reduces the stress on the threatened populations in the wild and helps ensure you will get a healthy, established eater and a snake already used to contact with humans. Buying from a reputable breeder will ensure that you will get the help and advice you need to assure that your ball feels comfortable and secure enough to eat after you bring it home and let it get settled for a week or so.

With the increased popularity of reptiles as pets there is increased pressure on wild populations. In addition to the more than 60, 000 ball pythons that are imported annually, ball pythons are killed for food and their skin is used for leather in their native land. For some reason, despite their low reproduction rate, wild ball pythons are the least expensive pythons on the market, generally wholesaling for under ten dollars. Imported ball pythons also harbor several different types of parasites which may go unnoticed by the novice snake owner. All around, it is better to buy a captive-born hatchling or an established, well-feeding juvenile, sub-adult or adult than an imported ball of any age.

In captivity, young ball pythons will grow about a foot a year during the first three years. They will reach sexual maturity in...

My Ball Pythons Being Active