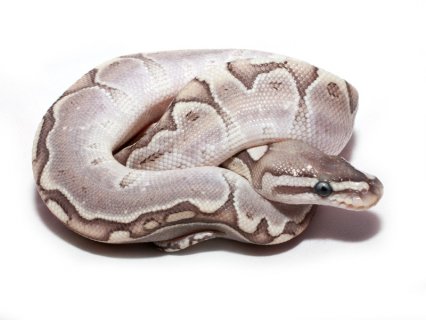 These are small, heavy-bodied pythons averaging three to six feet in length, with seven feet being the maximum. Females are generally larger than males. They are primitive snakes that still possess a pelvic girdle and "vestigial" limbs (an early stage presence of hind limbs, left from evolutionary adjustments). Both lungs are functional. The base color of these snakes vary and may be brown, tan or reddish with 15 to 25 yellow-edged, tan to medium brown blotches of varying sizes that run the length of their bodies. These snakes have upwards of 100 "recurved" teeth (curved inward), which are used to hold prey until the snake can kill them by constriction. Ball pythons, as with all snakes, do not chew or tear their food but instead swallow it whole.

These pythons are primarily terrestrial although they may occasionally be found in water or in low stumps and foliage. They are largely nocturnal, hunting for food at night. Ball pythons can hunt even on the darkest of nights due to adaptations such as heat sensing pits located in the scales boarding their mouths, and eyes that are adapted to low light levels. Noted for their gentle disposition, when frightened, ball pythons will tuck their head and curl into a ball, which is why they are named, "ball python."

Sexual maturity is reached between 18 months and 4 years, with males generally maturing earlier than females. The male stimulates the female with his spurs to initiate copulation. These oviparous (egg-laying) pythons lay 4 to 12 eggs depending on the age and size of the females. The females wrap their body around the clutch of eggs and through rhythmic movement, raise nest temperatures four to six degrees. They do not eat during incubation, which may last up to three months. Upon hatching, the young pythons are immediately able to hunt and constrict prey. These snakes mate every two to three years.

The Zoo has two ball pythons, one on display in the Small Animal Building, and another that is a part of the Education Animal collection and goes out to schools and civic organizations on a regular basis.

Because of their beautiful skin, ball python populations are declining. People have hunted these animals to use their skin to make boots. Unfortunately the skin is not very durable (not like cow hide), and the boots must be replaced often.