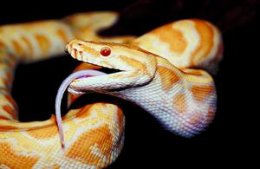 Little research has been conducted on the growth rates of wild snakes, and while there is conjecture that captive snakes grow more quickly than wild snakes, there's little data to support this. While a variety of predators hunt young Burmese pythons, large adults have few predators besides humans, so the snakes benefit from growing as quickly as possible. The Animal Diversity Web, maintained by the University of Michigan, cites an older publication by the American Museum of Natural History, which states that Burmese pythons mature in two to three years.

In a study published in the January 2001 issue of “The Journal of Experimental Biology, ” J. Matthias Starck and Kathleen Beese studied the effects of food on the intestinal growth of Burmese pythons. At the beginning of the study, a subset of snakes measured approximately 3 feet in length at 9 months of age. At the end of the study, approximately 2 1/2 years later, the snakes measured about 10 feet. The snakes increased in mass an average of almost 2 pounds per 100 days, or about seven pounds per year. The snakes in the study were fed prey of varying size, at intervals of 12 to 125 days.

Skilled keepers provide captive Burmese pythons with near perfect conditions; accordingly, captive animals likely grow more quickly than their wild counterparts. Through the desire to have a large pet and the entertainment value of watching a snake eat, many captives eat much more often than their wild brethren. Additionally, captive pythons are typically provided with access to constant heat and digest food more quickly than wild snakes. Well-fed, captive hatchlings can double their size in a matter of weeks, reaching 6 feet in length before they are 6 months old. According to a 1998 article published in “Reptiles” magazine, noted python breeder Bob Clark estimates that many Burmese pythons reach 10 feet around their first birthday.