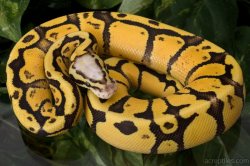 The Basics
Ball Pythons are the most popular species of Python in the United States and probably in the world. It is estimated that there are more Ball Pythons in captivity in the U.S. than all other Python species combined. The reasons for this are their typically calm demeanor, perfect size (not too big, but big enough to be impressive), attractive looks, and relatively low maintenance. Ball Pythons are simple to successfully maintain, but require several inexpensive pieces of equipment.

Once you have the necessary equipment, maintenance is probably lower than any other pet. What other pet can you feed as little as once every 10 days (although a healthy Ball Python can go months without food) and clean it's cage maybe 2-3 times per month? The only thing you have to do every single week is make sure that it has fresh, clean water. A US zoo had a ball python that lived for 49 years in captivity.

Adult Size
Adults average 3 to 4.5 feet, but there have been ball pythons as long as six feet in length. These specimens are unusual, but they do exist. When fully grown, females are larger than males.

Behavior
Ball Pythons are nocturnal, meaning they rest during the day and are active primarily at night. A ball python, like any snake, does not need to be handled to be happy. In fact, too much handling will cause your Ball Python to become stressed. Snakes are naturally solitary creatures and are not comforted by interaction with their owners or even other snakes. When they encounter another animal in the wild, they're either thinking about eating it or being eaten by it - or breeding it. :-)

Temperament
Ball Pythons are usually shy, docile snakes. They make excellent pets if cared for properly ball pythons will not use biting as a defense mechanism, but it's not unusual for them to strike at an owner's hand if they think it's dinner time. Always wash your hands after handling a food item and try not to handle your snake for a day or two after it eats - this will give the snake time to get out of "hunting mode". Instead of biting, a nevous or frightened ball python will curl into a ball and tuck its head tightly in the middle, in order to protect it from being harmed. This is where the common name for Python regius comes from.

Stress
Too much handling or lack of a place to hide can cause stress, which can cause them to quit eating and/or lead to an overall decline in health. As difficult as it may be, and as much as you will still want to, handling should be completely avoided until a snake has eaten at least five times for you. This "hands...