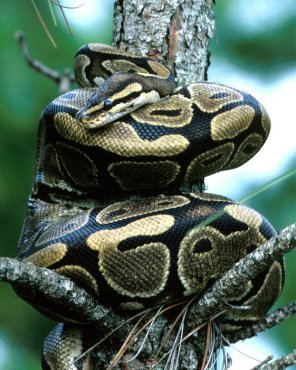 Africa: Ball Pythons are found in the wooded areas of Africa. They are found in Africa from Senegal, Mali, Guinea-Bissau, Guinea, Sierra Leone, Liberia, Ivory Coast, Ghana, Benin, and Nigeria through Cameroon, Chad and the Central African Republic to Sudan and Uganda.

Ball pythons are carnivorous and have mobile lower and upper jaws. They eat small mammals, birds, and small reptiles. Heat sensing pits along their mouths allow them to detect the location of their prey. They are ambush hunters that retract the head and neck and strike rapidly. After the rapid strike, they swallow prey alive or immobilize by constriction.

The name “royal python” (from the Latin regius) comes from the fact that rulers in Africa would wear the python as jewelry. This terrestrial species is known for its defensive strategy that involves coiling into a tight ball when threatened, with its head and neck tucked away in the middle. In this state, it can literally be rolled around. They have heat sensing pits along their mouths that allow them to detect the location of their prey. The ball python build is stocky while the head is relatively small. This is the smallest of the African pythons and is popular in the pet trade, largely due to its typically docile temperament. This python is known for being a picky eater and may not eat for months, particularly during the winter breeding season. Females are oviparous, with anywhere from 3 to 11 rather large, leathery eggs being laid (4-6 most common). These are incubated by the female under the ground (via a shivering motion), and hatch after 55 to 60 days. Sexual maturity is reached at 11–18 months for males, and 20–36 months for females.