Greatest Threat to the Everglades? 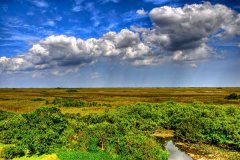 By Justine E. Hausheer, science writer at The Nature Conservancy

A deceptively deadly force is slithering its way through the Florida Everglades. Sinuous and stealthy, this invasive species is one of the greatest threats to the ecosystem. And it’s not a python.

Old World climbing fern, Lygodium microphyllum, is arguably the worst of many invasive species in the Everglades.

“It grows quickly, spreads easily, and is changing the entire ecosystem, ” says Kristina Serbesoff-King, the associate director of conservation for the Conservancy’s Florida chapter.

Pythons may get all the press, but this little fern has some serious destructive potential.

What is So Bad About a Fern?

Native to Africa, Australia, and southeast Asia, Old World climbing fern (OWCF) was introduced to Florida as an ornamental garden plant and was first found in the wild in the 1960s.

This situation is typical of non-native species — 90 percent of the problem invasive plants Florida were brought in on purpose, says Serbesoff-King, typically as ornamental or forage plants. Pythons were intentionally brought to the state, too, and today’s wild population is descended from both escaped and purposefully released pets. 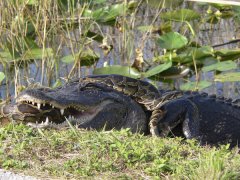 OWCF’s destructive power lies in sheer mass — it slinks its way up, over, and around native plants. Eventually the fern completely covers their leaves, blocking sunlight and literally smothering them. Native plant and animal species decline, and the fern takes over.

South Florida has no shortage of invasive species — according to estimates from the South Florida Water Management District, more than 130 of the animals in the greater Everglades ecosystem are non-natives, and about 26 percent of the mammals, birds, reptiles, amphibians, and fish in all of South Florida are non-native.

Pythons are certainly among the worst — they’re devouring mammals, birds, and bird eggs at destructive rates, having a direct impact on Everglades wildlife. So how can a plant be as problematic as a python?

The Everglades ecosystem is the emblematic river of grass, dotted with hardwood tree islands, or hammocks. Hammocks are a critical habitat for Everglades animals, providing dry ground, refuge, and a place to find food and breed.

But hammocks are no match for OWCF, which buries the islands under so much plant matter that they literally collapse. “They look like a massive green crater, ” says Serbesoff-King, “because the outside rim of trees is still standing, but middle has collapsed in on itself.”