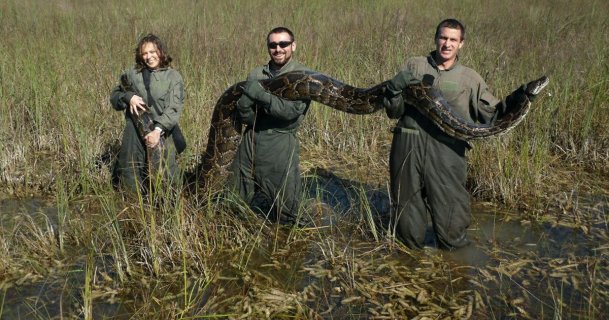 Jan. 10 (Bloomberg) - A flourishing population of Burmese pythons in South Florida is devouring animals such as bobcats and opossums, and threatening endangered species. So the state devised a solution: offer cash for hunters to kill them.

More than 670 hunters from at least 30 states have signed up for a contest called the “Python Challenge, ” which begins Jan. 12 and offers $5, 000 in prize money for those who slay the longest and largest number of the invasive snakes. They’ll trawl 1.3 million acres (526, 091 hectares), including part of the Everglades National Park, looking for snakes that the state says threaten the ecosystem and native wildlife.

“It sounds like a fun thing to do, ” said Adam Danker-Feldman, 24, a New York financial analyst who said he’s never hunted and signed up based on a friend’s suggestion. “He said, ‘Book your tickets, this is going to be an adventure.’”

Burmese pythons, native to Southeast Asia, eat endangered animals in and around the Everglades, including the Key Largo woodrat, a brown and white rodent with a hairy tail found only in the Florida Keys.

Federal, state and local governments have spent more than $6 million in Florida since 2005 trying to control pythons and other invasive constrictor snakes, according to the U.S. Fish & Wildlife Service.

There are an estimated 30, 000 pythons in the Florida Everglades, according the National Park Service website. Since 1995, the number that have been observed in the Everglades has “increased dramatically, ” according to the park service.

In 2010, Florida banned Burmese pythons from being acquired as pets. Last year, President Barack Obama’s administration banned the snakes from being imported or sold across state lines.

The pythons are among 137 invasive species of reptiles and amphibians in Florida, the most in the world, according to a 2011 study by Kenneth Krysko, herpetology collection manager at the Florida Museum of Natural History in Gainesville. Officials at the Everglades National Park this year found a 17-foot, 7-inch (5.4 meter) Burmese python with 87 eggs, both records.

The contest, which ends on Feb. 10, may provide useful data for scientists at the state Fish & Wildlife Conservation Commission to show where the snakes, which usually grow between 6 and 9 feet, are living and what they’re eating. That information can help with future removal programs, said Carli Segelson, spokeswoman for the conservation commission, which is running the event.