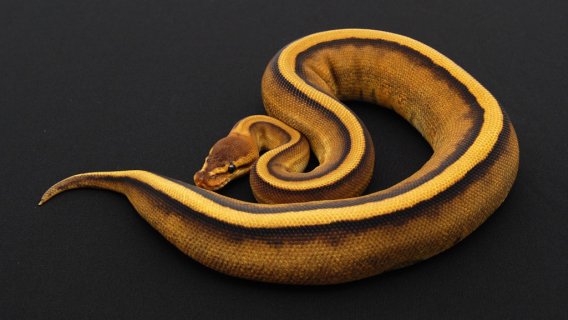 The ball python, also referred to as the royal python, is a python species native to Africa. It is one of the most popular exotic pets in the west, and its docile nature and relatively small size are largely responsible for this. Such is the demand for this species that they are specifically bred in captivity to be sold as pets, and these captive-bred specimen are preferred over their counterparts in the wild.

The ball python derives its name from its unique adaptation wherein it rolls into a ball when threatened. Its scientific name, Python regius, can be traced to the Egyptian legend, according to which Cleopatra, the queen of Egypt, used to wear these snakes around her wrists as bracelets. As for the name royal python, it is derived from the word, Regius, which is Latin for 'royal'.

Range and Habitat: In the wild, ball pythons are found in open forests and drier savannas of the western and central Africa. The species is found in Senegal, Mali, Liberia, Ivory Coast, Nigeria, Chad, Cameroon, Sudan, Uganda, Guinea, Ghana, and Sierra Leone. They prefer areas with some source of water in the vicinity where they can cool themselves.

Size and Appearance: The Ball python boasts of being the smallest python found on the African continent. Adult males grow on to attain a length of around 3-4 feet, while adult females, who are slightly bigger than the males, attain a length of around 4-4.5 feet. Ball pythons are typically black or dark brown in color, with light brown or golden spots, and have a white belly.

Reproduction: Males attain sexual maturity by 6-18 months after their birth, while the females achieve the same in around 12-36 months. Along with their age, the weight of the specimen plays a crucial role when it comes to sexual maturity. The female lays 4-11 eggs at a time and incubates them in the ground for 55-60 days. Once the eggs hatch, the female leaves the siblings to fend for themselves.

Hunting and Diet: The diet of a ball python mostly consists of small mammals, like rats, mice, gerbils, and shrews, as well as some species of birds. Being a constrictor, the species resorts to the ambush method and swallows its prey as a whole. (On the flip side, ball pythons-even the adults-have quite a few predators in the wild, including leopards, eagles, etc.)

If you intend to keep this species as a pet, there are a few things that you have to take into consideration. Firstly, the docile temperament of ball pythons does make them ideal pets, but it takes some time for them to get used to new surroundings, and therefore they may display some aggression in the beginning.

True Facts About The CuttleFish