Is a Python a poisonous snake

Are Pythons Venomous, Poisonous or Otherwise Dangerous to Humans?

Reader question: "I was wondering if pythons are poisonous snakes and therefore dangerous to humans? Anything you can tell me about this subject would be helpful. I am doing a school report on the different types of pythons, and whether or not they are dangerous is a big part of my report. Thanks in advance."

In a hurry? Here's the general idea of this article in 100 words or less. All pythons are non-venomous, and most of them pose no threat to humans. But a handful of species do grow large enough to constrict and kill their owners. These include the reticulated and Burmese pythons, along with a few other species. If you want to keep a member of the Pythonidae family as a pet, you might consider the more manageable ball python. 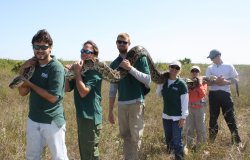 The first thing we need to do is distinguish between the terms "poisonous" and "venomous." Technically, they are two different things (and pythons are neither).

Pythons are not poisonous or venomous. They do not meet either of these definitions.

Pythons Are Not Venomous

All of the species within this family are non-venomous. This means they do not possess any venom that is harmful to humans. They kill their prey through constriction, literally by squeezing the animal to death. Venomous snakes, on the other hand, kill their prey by biting and injecting venom through hollow fangs or teeth.

Interestingly enough, scientists have discovered that pythons (and many snakes for that matter) have the remnants of a venom delivery system. They all go back to a common ancestor species, supposedly. But no, pythons are not poisonous / venomous in any way that could harm humans. They kill their prey by slowly squeezing it to death. They are constrictors.

The Larger Pythons Can Be Dangerous to Humans

I've divided this article into two parts because you are asking two different questions:

Poisonous snake under our house!!