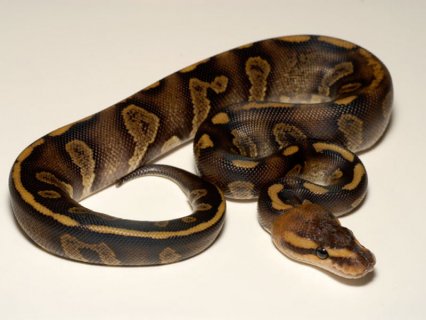 The cinnamon Pastel Ball Python is another great example of a solid investment snake. Cinnamon Pastel is a CO-dominant mutation; it has a Super form. This Super Cinnamon Pastel is a solid dark brown nearly black patternless snake.Cinnamon pastel ball pythons are lacking the yellow, gold and black coloring of normal Ball Pythons. They are shades of brown with a white belly. The Cinnamon Pastel gets darker as it matures as with most morphs. The colors becomes much more subtle and becomes two shade of brown. There endless possibilities with crossing this Morph. One example of this are the Pewter Pastels, absolutely stunning! Other variations of this mutation are being called Black Pastels and Red Axanthics.

Chris McQuade and Brian Barczyk have produced what is believed to be Super Cinnamons (the homozygous form of Cinnamon Pastel). The super form of the Cinnamon is a solid black ball python with a white belly.