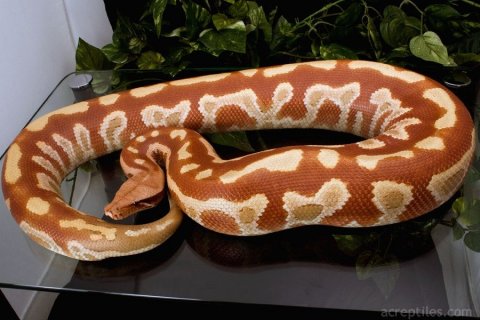 First off, great bino blood. Looks awesome and has some pretty good back striping going on! Originally Posted by Jungle Boas FTW

one of these will probobly be my next purchase.
they are soo kool.
i heard there little demons tho...hows yours?

That's like saying all boas bite or are mean just because someone elses is; it's utter and complete BS. I am sure imported bloods, which were once bout all you could get, were nasty as any wild animal, but true captives are hardly any more aggressive than most other snakes. I've been keeping bloods and short tails for about 2 years now, and they are fantastic snakes. I used to post pics of all mine every few months but my camera broke - not that they got much love anyways.

Their bites are way worse than a boa. Boas bite and release (usually) these guys bite, wrap around, chew, and chew for some minutes. Atleast every bite I've taken from each of mine end up this way, though only been bitten once by each one since I got them in aug 09, but often if they are not in a good mood they will "push you away" with their fat thick backs. Kind of like a bull bucking you off, they kind of push you away (or alll of mine do anyways...)