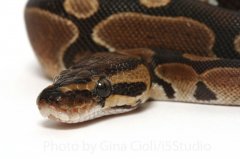 By Dave and Tracy Barker

At the beginning of the 1990s, the ball python (Python regius) was a snake that everyone in town danced with, but no one wanted to take to the prom. Despite their perfect size and temperament, attractive colors and pattern, they were inexpensive and common snakes. Nearly everyone started out with ball pythons and boa constrictors as their first exotic, tropical snakes, but the roving eyes of young snake keepers would nearly always begin to look at other snakes that seemed more worthy of their lusting obsessions. It's interesting now to see how at the end of the 1990s, ball pythons have become one of the most high profile and popular snakes in all of herpetoculture. It's like looking back and suddenly realizing that the kid next door who you snubbed has grown up to become an international super model.

We started to collect ball pythons in 1989, and until 1991 we bought beautiful ball pythons from the importers for $5 extra. We found all manner of color and pattern anomalies, beautiful ball pythons that were "in the trade" and about to be sent to some small pet store to sell for $15 or $20. But it all changed and changed quickly in 1992, when the first captive-bred albino ball pythons became available for $7, 500 each. Since then, every single one of the tens of thousands of ball pythons that are annually imported has been carefully scrutinized to see if it's different, if it has some additional market value because of some quirk of pattern or color unique to that snake. 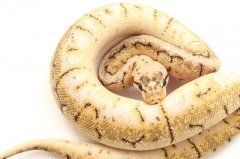 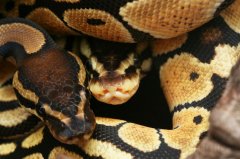