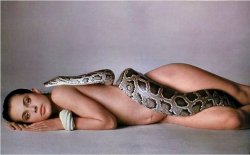 The Burmese Python (Python molurus bivittatus) is the largest subspecies of the and one of the 6 largest in the world, native to a large variation of tropic and subtropic areas of southern and southeast Asia. They are often found near water and are sometimes semi-aquatic, but can also be found in trees. Wild individuals average 3.7 metres (12 ft) long, but may reach up to 5.8 metres (19 ft).

Burmese Pythons are dark-coloured snakes with many brown blotches bordered in black down the back. The perceived attractiveness of their skin pattern contributes to their popularity with both reptile keepers and the leather industry. The pattern is similar in colour, but different in actual pattern to the African Rock Pythion (Python Sebae), sometimes resulting in confusion of the two species outside of their natural habitats.

In the wild, Burmese pythons grow to 3.7 metres (12 ft) on average, while specimens of more than 4 metres (13 ft) are uncommon. Individuals over 5 metres (16 ft) – like a specimen from Cooch Behar with 5.8 metres (19 ft) and 91 kilograms (201 lb)– are very rare. There are reports of snakes more than 6 metres (20 ft) long, but those are often result of confusion between Burmese Pythons andReticulated Pythons, stretched skins, or simple exaggeration. 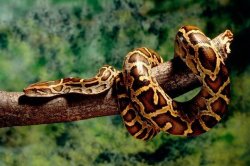 There are also dwarf forms onJava, Bali and Sulawesi. At Bali they reach an average length of 2 metres (6.6 ft) and on

Burmese Pythons are mainly nocturnal rinforest dwellers. When younger they are equally at home on the ground and in trees, but as they gain girth they tend to restrict most of their movements to the ground. They are also excellent swimmers, being able to stay submerged for up to half an hour. Burmese Pythons spend the majority of their time hidden in the underbrush.

In the northern parts of its range, the Indian python may brumate for some months during the cold season in a hollow tree, a hole in the riverbank or under rocks.

Brumation is biologically distinct from hibernation. While the behaviour has similar benefits, specifically to endure the winter without moving, it also involves preparation of both male and female reproductive organs for the upcoming breeding season. There is controversy over whether the Burmese subspecies is able to brumate, and it is believed by experts to be unable to distinguish between a slight chill and dangerous cold weather.Burmese Pythons breed in the early spring, with females laying clutches which average 12–36 eggs in March or April. She will remain with the eggs until they hatch, wrapping around them and twitching her muscles in such a way as to raise the ambient temperature around the eggs by several degrees. Once the hatchlings use their egg tooth to cut their way out of their eggs, there is no further maternal care.

The newly hatched will often remain inside their egg until they are ready to complete their first shedding of skin, after which they hunt for their first meal.Like all snakes, Burmese Pythons are carnivores. Their diet consists primarily of appropriately-sized birds and mammals. The snake uses its sharp rearward-pointing teeth to seize its prey, then wraps its body around the prey, at the same time contracting its muscles, killing the prey by constriction. They are often found near human habitation due to the presence of rats, mice and other vermin as a food source. However, their equal affinity for domesticated birds and mammals means that they are often treated as pests. In captivity their diet consists primarily of commercially-available, appropriately-sized rats, and graduates to larger items such asrabbits and poultry as they grow. Exceptionally large pythons may even require larger food items such as pigs or goats, and are known to have attacked and eaten alligators in

Florida, where they are an invasive species. They have been known to swallow entire deer as well.

The digestive response of Burmese Pythons to such large prey has made them a model species for digestive physiology. A fasting python will have a reduced stomach volume and acidity, reduced intestinal mass and a 'normal' heart volume. After ingesting prey, the entire digestive system undergoes a massive remodelling, with rapid hypertrophy of the intestines, production of stomach acid, and a 40% increase in mass of the ventricles of the heart in order to fuel the digestive process.

The Burmese python is frequently captive-bred for colour, pattern, and more recently size. Its albino form is especially popular and is the most widely available morph. They are white with patterns in butterscotch yellow and burnt orange. There are also "labyrinth" specimens, which have mazelike patterns; khaki-coloured "green"; and "granite", which have many small angular spots. 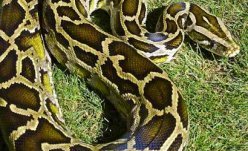 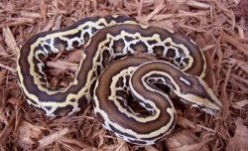