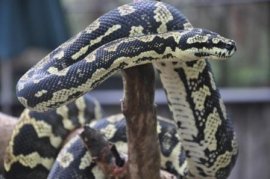 Jungle carpet pythons have become popular pets due to their stunning colouration, but in the wild their numbers are decreasing due to the destruction of their habitat.

Lush tropical and subtropical forests near waterways and creeks. They are found in a very small range near waterways running off the Atherton Tableland and the south-eastern part of the Cape York Peninsula, Queensland.

Small mammals, birds, frogs and lizards. The snake kills its prey by constriction.

As with other python species, the jungle carpet python lays a clutch of eggs which the female incubates by coiling around them and shivering her muscles to keep them warm.