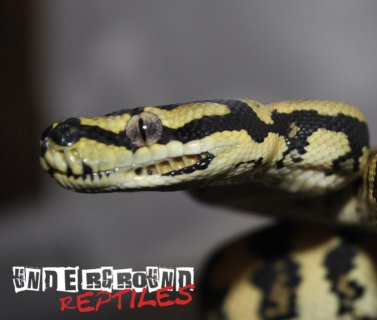 July 21, 2014 – 08:36 am
The father of two of the litters is the one pictured on the cover of their book, Pythons of the World Volume 1, Australia. I picked out 2 males and three females by pattern alone because the color doesn't come in until about one year of age. I did a pretty good job and have been impressed at their colors.

(THE PHOTO GALLERIES HAVE MUCH BETTER PICTURES BY SNAKE.see above)

Above is my first and oldest female. I watched The golden female and my Tracy male (above left) breed on February 05-2002. She had babies on June 27 of 2002. I have sold all of the 2002 offspring, But I have photos of a few that I held onto until they were 9 months of age (look in photo gallery above. April_2003). The full adult colors do not come in on Jungle Carpet Pythons until they are about 18 months of age, which means even though the babies look very colorful in these photos, They still have a LOT of yellow to gain before they stop gaining colors (yellows). I have asked all the people who purchased baby carpets from me to send me photos as they age. I have only received photos from a few people... so to the 80+ others.YOU KNOW WHO YOU ARE.Send me photos. I want photos for my personal satisfaction as well as for a reference point that I can have on the site of baby snakes that the Golden pair produced in the past, so the people buying babies in 2006 and in the future, will have a good Idea of what their snakes will look like as they grow up.