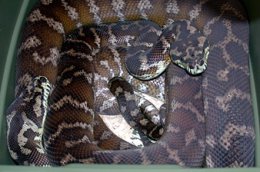 Irian Jaya carpet pythons reach sexual maturity at 18 months to 3 years of age, at length of about 3 feet for males and 4.5 feet for females.

In captivity, Irian Jayas breed from December until March. They don't seem to need cycling, which is a temperature drop in the winter, but giving them a cooling period seems to increase the chance of successful breeding. I let the temperatures drop in winter to about 75 F at night and 85 F during the day. I also gradually decrease the daylight to about 8 hours a day. I restore the 90+ F hot spot and the usual 12 hours of daylight after the female ovulates.
The copulation takes place after the male follows the female in the cage for a while. He will wrap his tail around her and insert his hemipene into the female's cloaca. I will keep my male with the female for 4 - 5 days, and then remove for 3. To ensure success I let them copulate many times. Seing them breed once does not meant it will be a success.
At one point the female will ovulate - it will show as a swelling in her mid-body section. It will usually subside after 24 hours and will move towards her cloaca.
After this I give the female a steady undertank 88 - 95 F basking spot and prepare an egg laying chamber for her (a nest box). Moist sphagnum moss works great as a substrate in nesting boxes, but this time I gave her regular aspen shavings, which I made sure to moist every day. She will not feed and spend most of the time there - basking.
Below is my female just few days before oviposition. 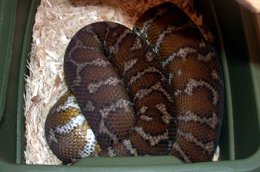 You can see her 'contorted' in a quite common for gravid pythons basking positions, having parts of her body inverted.
I still offer them food during this period, but they usually refuse it. I had my female eat though sometimes. When offering food during this time, you should stick to smaller items, like an adult mouse instead of a rat if your snake is a rat feeder.
Female Irian Jaya carpet python will shed 2 to 3 weeks after ovulation. At the end of the gestation the female may hiss and be a bit restless, and eventualy lay eggs 3 to 4 weeks after that.
This female shed on the 15th of April 2007 and laid eggs on the 7th of May, 22 days later. 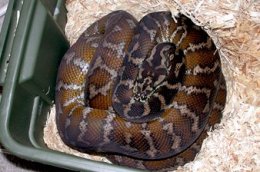 Below you can see her on eggs just few hour after the oviposition.
You can see how how tightly she is coiled around her eggs - no eggs are visible except for only a small part of one egg (see the arrow)
And below the close-up of the visible egg.
started shedding on July 15/2007 Below are the eggs, still in the nest box, soon after removing the female. This time I got 15 fertile eggs and one slug - 804 grams which makes about 48 grams each egg. 'Slug' is an unfertilized ova - unlike the 'good' eggs, which are usually pearly white and soft, the 'slugs' are hard, dense, and orange/yellow in color. You can see the slug in this clutch at the very top of the egg mass in the photo below.
You can see the difference between the good fertile egg and a 'slug' in the picture below. (slug is the orange mass at the top of the egg mass)
And here, the eggs from this year already in the incubator.
The Irian Jaya python's eggs can be incubated the same way as most python eggs, which is at about 86 - 90 F in high humidity ( 75 to 100 % ). The babies will hatch after about 60 days (plus/minus few).
The babies were born on tduring a two day period between the 28 and 30th of June 2007. I got a 100% hatch rate - 16 babies. 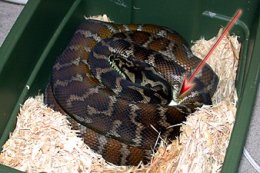 At 442 g all together, which makes about 27.5 g each small snake. It is a good practice to manually pip all the eggs after the first snakes slit through the shells. (the colorful 'thing' that you see in the upper right corner is a decompositing 'slug' - unfertilized ova. Some poeple remove them prior to incubation, but this should be done only if it's easy to seperate them from the rest of the egg mass. In fact this is not a necessary thing to do, because the rotting 'bad' egg does not affect the fertile and developing ones).
The babies should be left alone in the eggs until they absorb all the egg yolk, which they will usually leave after 24 to 48 hours.
After they hatch they should be moved to a moist container and left there until their first shed, which happens within the next 7 to 10 days. These shed on July 15th. After this I move them to their own seperate bins.
At this time they can be offered their first meal - a pinky mouse, but I recomment waiting a few days or a week to get their feeding response stronger. Some pople wait even longer - 4 to 6 weeks. This is supposed to create a stronger feeding response of the snake, but it doesn't have to be a rule. I have found out that the little snakes will react individually to the offered food. Some will eat on their own in the first week, some will not show any signs of interest even after a month. Some will readily start on dead frozen thawed pinky mice, some will only take live. Those which refuse food alltogether have to be force fed. Usually, there will always be those in a clutch which will somehow show no will to live and eventually die. 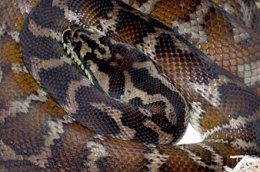 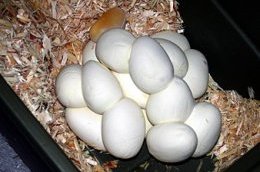 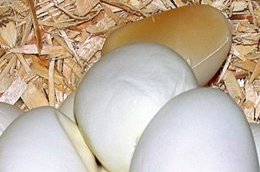 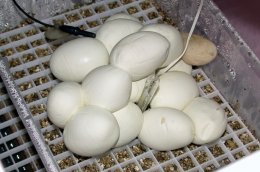