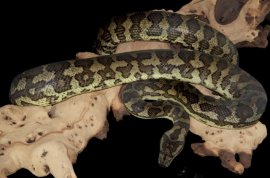 The East Queensland Carpet Python (also known as the Coastal or Brisbane Carpet python) is one of the best known and most commonly kept of all Australian snakes. Throughout its range it

shows great variability in colour, size and other characteristics and will probably be divided into several subspecies in the future. Morelia spilota mcdowelli from the northern extreme of its range are probably best kept warmer and at higher

humidity than those coming from the southern extreme of their range (where they gradually merge with the Diamond Carpet Python, Morelia spilota spilota, which has significantly different husbandry requirements). Despite this, most forms of this taxon are very hardy and will tolerate a wide variety of conditions, as long as a few basic criteria are met. The carpet pythons from south east Queensland are said to be the largest of all the carpets, sometimes reaching over three metres in length, although most adults are between two and two and a half metres.

Being a large, attractive looking and easy to care for species, they make excellent captive specimens.

It is probably worth noting that some keepers may use different methods and these may work equally well or better than those described here. The information given is mostly based on the methods used successfully by the author and are given as a guide only. Most of the information given here can be applied to other forms of carpet pythons, and other python species.