A snake has defeated a crocodile in an epic five-hour battle at a lake in Australia which left onlookers shocked as the python slowly devoured its prey.

The clash between a large water python and a three-foot fresh water crocodile occurred at Lake Moondarra near Mount Isa, a remote town in the north-west of the state of Queensland.

In remarkable images captured by Tiffany Corlis, a local who was watching on, the python can be seen strangling and eating the crocodile, whose outline can then be seen inside the snake.

Ms Corlis said the crocodile tried to fight but was no match for the python.

"(The crocodile) was fighting at the start, it was trying to keep its head out of water and survive, ” she told ABC News. “But as the morning progressed you could tell both of them were getting a little weaker as the struggle was going on, finally the croc sort of gave in."

Ms Corlis said the onlookers were frightened but stunned by the dramatic battle. Locals said the fight lasted about five hours.

"It was just unbelievable, we were sort of thinking the snake had bitten off a little more than it could chew, pardon the pun, but it did actually eat the crocodile, " she said.

"You could see the crocodile in the snake's belly which I think was probably the more remarkable thing. You could actually see its legs and see its scales and everything, it was just amazing."

A snake expert, Associate Professor Bryan Fry, from the University of Queensland, said water pythons typically targeted rodents and smaller animals, but small freshwater crocodiles were relatively easy prey. The snake would probably not need to eat again for another month but would probably “tuck itself away” because it would not have a means of defending itself, he said. 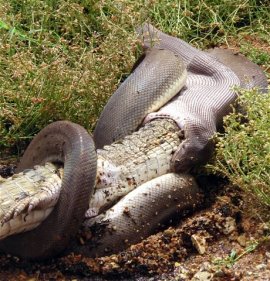 The python begins to swallow the crocodile (Barcroft)