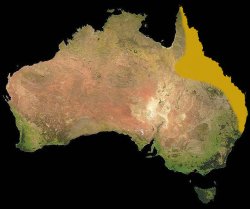 About: Coastal carpet pythons are aptly named, as they occur along most of the east coast of Australia. They are very commonly kept in captivity and have a variety of appearances and sizes. Several morphs have also been established, adding to the variety of projects available with this subspecies. Range: These pythons have an extensive range from north New South Wales to the the northern tip of the Cape York Penninsula, Queensland, extending into the interior of Queensland.

Habitat: Like most carpet pythons, the coastals are avid climbers. They are found in a variety of habitats, including temperate rainforest and eucalypt scrub forest.

Natural History Notes: These snakes have adapted well to human encroachment and can be found in the overgrown brush around human habitation. 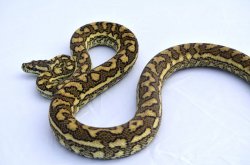 They are often found in the rafters or attics of buildings. This has the benefit of a ready food source of mammals attracted to areas of human development.

Due to the close association with man, these pythons are commonly observed throughout their range and may be the most commonly encountered carpet python in Australia. These snakes may also obtain rather large proportions, reaching lengths of 10 ft or more.

Studies have described various reproductive events of wild coastal carpet pythons. One female was found incubating a clutch amongst bales of hay. Upon inclement weather, this female abandoned her clutch, which was taken up by the observer and incubated artificially.

Another female was found below a piece of discarded tin amongs rotting vegetation, which successfully incubated her clutch to hatching.

General Notes: The jaguar is the original carpet morph, originally produced in the coastal carpet, and has been crossed with various subspecies and species. Other morphs include the axanthic, tiger (striped), and the hypo or caramel. These have also been combined together to produce some interesting appearances. We are working with all of the available morphs in various combinations. 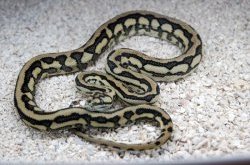 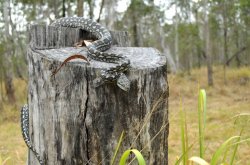 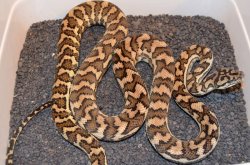 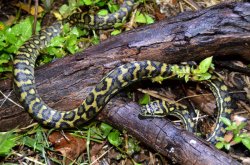