Where do Pythons live?

‘Monty Python: The Meaning of Live’ to Premiere at the Tribeca Film Festival 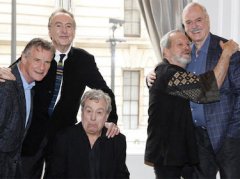 Get ready for another Monty Python reunion. According to The Wrap, a new documentary called Monty Python: The Meaning of Live is set to premiere next month at the Tribeca Film Festival followed by a 40th anniversary screening of Monty Python and the Holy Grail as well as other Python screenings and live Q&As by John Cleese, Terry Gilliam, Eric Idle, Terry Jones, and Michael Palin. The documentary is a behind-the-scenes look at the group’s work on last year’s reunion shows in London and “examines the personalities, relationships, and circumstances that made the Pythons into a global phenomenon.” Said Palin: “The Pythons are looking forward very much to the Tribeca Film Festival and the chance to meet anyone who can remember why we made Monty Python and The Holy Grail. All we know is that it was a documentary about coconuts that rather lost its way. If anyone at Tribeca can explain why we made it and didn’t call it Braveheart then our visit to New York will not have been wasted.”

Yes, Alligators really do live in the sewers

Peter Sarstedt-Where Do You Go To My Lovely (Live)

Monty Python to reunite for live one-off show in London