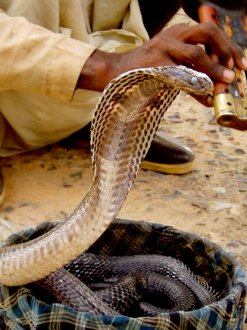 What do snakes eat?

There are many kinds of snakes, and all of them have predators.

Hawks and eagles kill and eat snakes. In fact, snakes are the primary, or main, food source for some birds of prey.

Mammals such as weasels and foxes eat snakes, and big snakes will eat smaller snakes.

Poisonous snakes also have their predators. In Asia, a weasel-like mammal called a mongoose often kills and eats venomous cobras like the one in the photo. Mongooses are faster than cobras, which is why they can beat them in a fight.

Even the biggest snakes sometimes meet their match. In Asia and Africa, crocodiles and leopards sometimes kill and eat huge pythons, and the South American anaconda, which is the world’s biggest snake, is preyed on by the jaguar and the caiman—which is an alligator-like reptile.

As for the question, what does a snake eat?—snakes, depending on their species, eat a variety of other creatures, from rodents to fish to other snakes. The largest snakes—pythons and anacondas— are capable of swallowing creatures as big as a pig, and even larger!