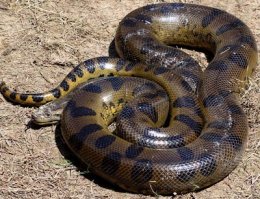 What's the biggest snake in the world? People have argued about this for years. Part of the problem is the definition of the word "large." Do you mean the longest or the heaviest? Are we talking about the largest single specimen ever found or an average for the species? Do you consider unconfirmed reports, or only rely on double-checked evidence?

If we are looking for a report of the largest snake ever seen we might want to look at a story told by Colonel Percy H. 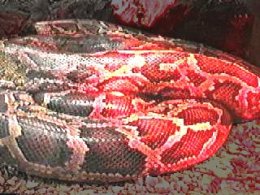 Fawcett, a former British Army officer, surveyor and adventurer in South America in the early 1900's:

We were drifting easily along on the sluggish current not far below the confluence of Tigor and the Rio Negro when almost under the bow there appeared a triangular head and several feet of undulating body. It was a giant anaconda. I sprang for my rifle as the creature began to make its way up the bank, and hardly waiting to aim smashed a .44 soft-nosed bullet into its spine, ten feet below the wicked head. At once there was a flurry of foam, and several heavy thumps against the boat's keel, shaking us as though we had run on a snag...

Fawcett describes how they stopped and examined the body. 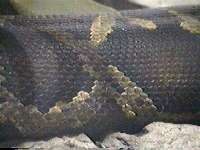 Though he had no ruler, he guessed the length of the creature at sixty-two feet with a twelve-inch diameter. "Such large specimens as this may not be common, but the trails in the swamps reach a width of six feet and support the statements of Indians and rubber pickers that the anaconda sometimes reaches an incredible size dwarfing that shot by me. The Brazilian Boundary Commission told me of one exceeding eighty feet in length!"