Python Reticulated is The Longest Snake in The World 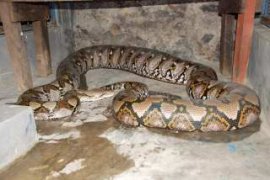 The reticulated python is the longest snake in the world. It can reach lengths of up to 9 meters in nature like a Sumatera Islands or Kalimantan – Indonesia. Such a huge snake is exceedingly rare, however most adult Reticulated Python top out at between 6 meters until 7, 5 meters. This snake is a semiaquatic snake found in Asia include Indonesia. The most reticulated python are temperamental and wild behavior. This is the only snake in the world that is reliably confirmed to have killed and eaten human. For example is real tragedy in Borneo Island, a children killed by Reticulated Python from Borneo Island or Kalimantan Island- Indonesia.