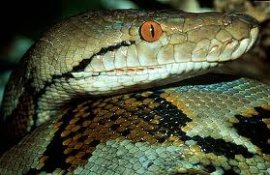 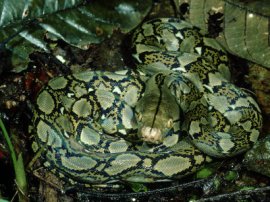 The word "reticulated", according to Merriam-Webster, means to divide, mark, or construct so as to form a network. Reticulated pythons have a network of irregular patterns, spots, shapes and colors on their skin which forms excellent camoflauge. Up close, these colors may include tan, yellow, gold, brown and dark brown. Some of the shapes may resemble diamond-like structures with large spots that fill the interior. From even a short distance, reticulated pythons begin to take on a muddy appearance and it becomes difficult to distinguish the shapes or colors. Reticulated pythons' camoflauge makes them well suited to lying on a forest floor with dead leaf matter and mud, hiding in trees or on tree branches, or waiting in mud near a river bank.

Reticulated pythons are cold-blooded, and live in warm, tropical climates in order to keep their blood warm year round.

Although there are many similarities between reticulated pythons and anacondas, one of the main differences is how they give birth. The eggs of anacondas hatch while still inside the mother, and the mother then gives birth to live young.