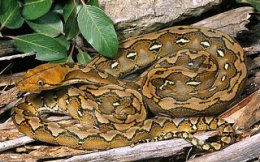 Reticulated Python - the longest snake in the world can grow up to 33 ft.(9.9m.) in length.

The largest specimen of the reticulated python ever found in the wild was reported in 1912 from the island of Celebes (now known as Sulawesi) in Indonesia. This snake measured thirty-three feet.

The reticulated python gets its name from the distinctive color and pattern on its scales. According to Webster’s International Dictionary the word “reticulated” is an adjective defined as “having lines intercrossed, forming a network.” It is also known as the regal python.

Reticulated Python, the world’s longest snake is found throughout coastal Southeast Asia. Reticulated Python (Python Reticulatus) is the longest snake in the world, and among three Old World Pythons. It is relatively slender and characterized by an attractive pattern - diamond shaped outline highlighted by white spots with light brown background. They are native throughout coastal Southeast Asia, from Myanmar to Nicobar Island, east of Peninsular Malaysia, Vietnam and most of the islands of the Indonesia and Phillipines. In India this species is found in Eastern Assam and Nicobar island.
The reticulated python can be found in variety of habitats, including open woodlands, dense forest, rocky areas, lakes, rivers and swamps. This species is rarely found far away from fresh water. The snake can attain considerable bulk and size, some specimens exceeded weight over 980 pounds and 49 feet, making it the world’s longest snake. However, 10-20 feet is the average length of an adult. 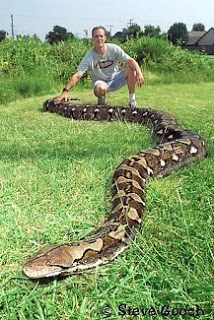 It has been reported that the temperament of this species varies according to different geographical areas. For example, the reticulated python of the Lesser Sundas Islands of Indonesia and central Thailand are more docile and calm snakes in captivity, than in other areas, like the reticulated pythons of Sulawesi Islands of Indonesia are typically irritable and defensive.
These pythons normally resides in humid forest with temperatures ranging from 80-92F. Due to excessive dependence on water these snakes are often found besides small ponds and streams. They avoid daylight. Distinguishes its prey by there movement and their odour. They have heat sensing pits, that is, small rectangular openings in the scales on its lips which help them to sense the warmth of its prey.

Super Tiger Reticulated Python out and about