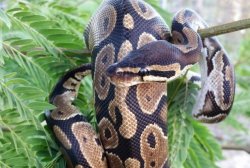 Researchers have identified a novel virus that could be the source of a severe, sometimes fatal respiratory disease that has been observed in captive ball pythons since the 1990s. The work is published this week in mBio®, the online open-access journal of the American Society for Microbiology.

Investigators observed the virus, which they named ball python nidovirus, in eight snakes with pneumonia; virus levels were highest in the animals’ lungs and other respiratory tract tissues. The team also sequenced the genome of the virus, finding it to be the largest of any RNA virus yet described.

“This is really exciting because up to this point there have been no known viruses of this type in reptiles, ” DeRisi said. “Some of the most feared diseases we know of, like Ebola virus, HIV, Middle East Respiratory Syndrome (MERS) and Severe Acute Respiratory Syndrome (SARS), did not arise from people but have been transferred originally from animals. Our work suggests there may be very large reservoirs of genetic diversity of viral families that can cause human disease in under studied organisms, like reptiles. We would do well to look broadly across all species.”