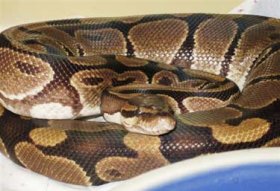 Sub-Saharan central Africa. Ball pythons are found in the grasslands of the Sudanese sub province, which is west of the Nile, Southern Sudan in the Bahrel Ghazal, Nuba Mountains (Southern Kordofan), and in West Africa from Senegal to Sierra Africa.

There is no obvious secondary sexual characteristic that allow for instant determination of sex, as sizes of individuals can vary greatly. But, in general:

Ball python and her setup