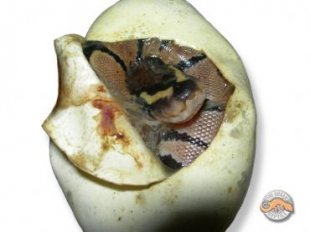 Ball Pythons are one of the easier reptiles to breed in captivity but there are several essential steps that need to be followed. Ball Pythons can reach maturity once males are 400 grams and females are 1500 grams. This can be reached in as little 6 months for males, and 18 months for females, however waiting until a male is entering his second winter and a female her third will increase your chances of a larger clutch and better fertility rates of the eggs.
Sexing ball pythons can be a very easy and straight forward once you learn the proper techniques. The two most reliable methods of sexing are popping and probing. When popping a Ball Python you are trying to evert the hemipenes of the male or the musk glands of a female. This procedure can cause severe damage if done incorrectly, so we strongly recommend having an experienced breeder show you how to do this before you attempt it yourself. The process utilizes a rolling / pushing motion, where your thumb is used to evert the sex organs of the snake from the cloacal opening. It is much easier to do this when the animal is young and has less strength in its tail.
Probing is done by inserting a thin specially made metal probe into the snake’s cloaca in the direction of the tail. The sex of the snake is determined by the depth of which the probe enters. A male Ball Python will typically probe to a depth of 5+ sub caudal scale whereas a female will only probe to a depth of 2-3 subcaudal scales. If there is any pressure felt, stop applying any pushing movements. It could mean that you have a female or that it’s a male that has tensed it muscles and stopped the probe from going the full length of the inverted hemipene. To be on the safe side, withdraw the probe, re-lubricate and try the other side.
Breeder Ball Pythons should be put through a cooling or cycling period to help stimulate the breeding cycle. Before Ball Pythons enter the cooling period it is crucial that they are robust and have no lingering health issues that could flare up under cooler temperatures. We begin our cycling in mid October and during cycling night time temperatures are lowered to the mid to high 70’s(F) with daytime highs of mid to high 80’S(F) We continue to feed both males and females, but feed smaller less frequent meals. All other basic cleaning procedures stay the same.
After 3-4 weeks of cooling, males can be introduced into the female’s enclosure. We leave the male in with the female for 3 days followed by a 3 day break. During a breeding season one male can potentially breed with as many as 12 females. However we usually pair 1 male to 8 females and ensure that they have copulated at least three times in order to increase the chances of a successful breeding.
We begin warming temperatures back up in mid-March. Females that have been successfully bred will start to show signs of ovulation at this stage. Ovulation signs include females seeking out cooler areas of the enclosure, wrapping around their water bowl and will often go off food. Right before ovulation a female’s colours will also intensify and dark areas will lighten, this is called a snake’s “glow” and it can last four to eight weeks prior to ovulation.
When a female ovulates the back third of her body will be largely distended, looking like she has just eaten a very large meal. Gravid females will usually have a pre-lay shed 2 to 3 weeks after ovulation and will then lay her eggs in around 4 to 5 weeks. Ball Pythons lay one clutch of eggs per season and the average number of eggs per clutch is six. Ball Pythons lay one clutch of eggs per season and the average number of eggs per clutch is six.
We always remove the eggs right after the female has finished her laying eggs and carefully place them in an incubation container that contains about three inches of damp vermiculite with plastic egg crate on top. The lid should be tight fitting to lessen the amount of humidity being lost. We incubate all of our python eggs at 89F. Eggs should be checked daily; opening the lid of each tub and wiping off any excess condensation that has formed on the lid and sides of the tub. It is important not to get any water on the egg can cause it to mold on the eggs.