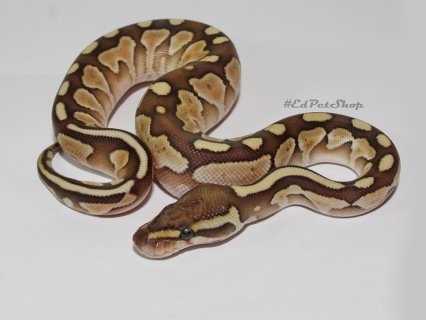 The Natural History of the Ball Python, Python regius: Ball Pythons in the Wild

As recently as the early 1990’s, the now popular ball python was considered a troublesome captive, due largely to the prevalence of wild caught adults in the trade. Today it is widely bred in captivity, but certain of its natural traits continue to affect how we go about keeping it as a pet. We’ll take a look at some of those traits, and then go on to captive care in future articles.

Although small as far as pythons, go, this species is very thickly-built. Ball pythons average 3-5 feet in length, with occasional (and now only rarely encountered) specimens reaching 6 and even nearly 7 feet. It is the smallest African representative of the genus Python, but not the smallest African python per se. That title goes to the West African burrowing python, Calabaria reinhardtii, which rarely exceeds 3 feet in length.

Ball pythons are dark brown to nearly black in color and marked with numerous, generally oblong blotches of tan, light brown, reddish-brown or yellow-orange. The color of wild specimens varies tremendously among different populations, with pied and even albino individuals reportedly being encountered more frequently than is usual among other snake species. This may account for the ease in which captive color morphs are produced, although incubation temperature seems to affect the color pattern as well. The savannahs of Ghana are known for their predominance of yellow-orange ball pythons, which are much favored in the pet trade.

Sub-Saharan Africa, from Senegal on the west coast northeast through Mali to western Sudan and southeast through Guinea-Bissau to the Gulf of Guinea, then east to the Central African republic, possibly Zaire, and Uganda.

Although typically described as being native to “Tropical West Africa”, the ball python actually has a fairly wide distribution across central and into parts of east Africa. In addition to the aforementioned countries, ball pythons have been recorded from Niger, Chad, Guinea, Sierra Leone, Liberia, Ivory Coast, Ghana, Togo, Burkina Faso, Nigeria, Benin and Cameroon.