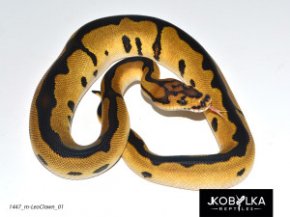 The Leopard Clown is the most essential combo to future of the Clown project.

As the major pioneer of the Leopard Clowns, here’s my case…

History: The Clown gene has always been a major Ball Python staple. Its a stunning recessive pattern morph with a look that cannot be reproduced with other gene combinations. It was the 3rd morph I personally purchased, dropping over $20k into my first pair of visual base-gene Clowns.

The Clown has had several huge market revivals with new combos bringing it back into the public eye.

The first big boost was the Pastel & Killer Clowns which set off a frenzy to produce these combos. The next big push came with the Lesser / Bumblebee / Killer Bee Clowns. These were the first big pattern changing Clown combos and they had a HUGE effect boosting this old recessive right back to the top of demand. The scramble for Clown combos has yet to drop back down with amazing new combos such as Enchi Clown combos, Banana combo Clowns and now Leopard Clowns and combos.