The Evolution of Nocturnal Hunting in Ball Pythons

The thought of why and how ball pythons may have evolved to hunt primarily at night in the wild came upon me while I was cleaning ball python cages yesterday. This blog entry is more or less a loose hypothesis or collection of possibilities on why and how ball pythons evolved to hunt at night as opposed to during the day. I must preface this blogy entry by stating that these are by no means facts, only my personal thoughts and ideas after pondering the subject matter later that evening. Consider this blog more or less a discussion on the topic and nothing more since I've done no research either way to prove or disprove any of the ideas that follow. Your comments are very much welcomed so please share your thoughts on this topic.

Most people notice immediately the row of holes or “pits” above the mouth area on a ball python because they look odd or different. It's easy to think that these holes are used for breathing since we as humans have a pair of holes on our face as well right above the mouth area that we refer to as a “nose”. On the contrary, the holes or pits in a ball python are not used to breathe but are used to measure external heat sources and the proximity or distance of the heat source from the ball python itself. 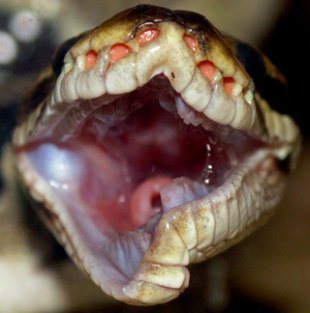 In order to discuss why and how ball pythons may have evolved to hunt at night, we have to first remove the notion of captive bred ball pythons from the picture and examine their original birth-place, Africa. Africa is home to a diverse and rich assortment of animals, both small and large. Temperatures tend to be hot in many areas and the selection of animals - both predators and prey - demand that in order to survive an animal must adapt to its environment along with the threat of surrounding predators or face extinction, hence the term “survival of the fittest”.

Ball pythons are not dangerous creatures when compared to deadly snakes in Africa such as the Black Mamba, Puff Adder and Gaboon Viper just to name a few. In fact, ball pythons don't grow to massive lengths like the Burmese Python, Reticulated Python, Anaconda and the like so they are in fact quite vulnerable snakes. This vulnerability would have forced the ball python to migrate and dwell in areas where they were less likely to become prey to other notorious predators such as the Lion, Hyena, etc., and remain hidden for the most part in shelter from other predators wishing to seek them out as prey. This desire to stay concealed is probably why captive bred ball pythons tend to stay tucked away hiding in their hide-boxes for the most part.

The primary predator of the ball python in Africa is the Black Cobra. Ball pythons evolved a defense posture to combat this predator by fashioning their bodies into the shape of a ball, hence the name “ball python”. A black cobra cannot swallow a ball python that has fashioned its body into the shape of a ball so I can only venture to believe that ball pythons developed this defensive posture over time. Early ball pythons that did not curl up somewhat or contort their body were eaten and the ones that did survived, thus passing this important trait down to future generations. Since curling up meant survival, ball pythons over time through natural selection have developed the ability to fully fashion their bodies into the ball shape that we know today.