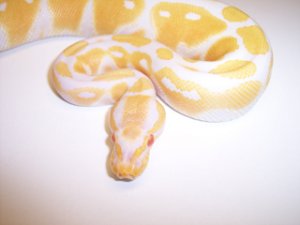 This is a very common question I’ve seen not only in our ball python forum but in other ball python forums as well. Someone has a ball python that they’ve acquired from a source other than a breeder – pet store, a friend, etc – and they want to know if they’ve miraculously “hit the lottery” and have something other than a normal ball python. The general theme is usually the same, “it looks different, is lighter or darker in color, the pattern looks unique, etc.”

Normal or “wild-type” ball pythons are what nature intended ball pythons to look like. They have a combination of dark colors and patterns to help break up their outline so they can camouflage themselves or blend in better with the scenery. This color and pattern ensemble is what helps them succeed in hunting and capturing prey in the wild. Ball python morphs on the other hand are the result of “mutations” in the DNA structure that changes or “morphs” the animals’ physical appearance in such a way that it differs significantly from ordinary normal or wild type ball pythons. These morphs exhibit an unusual color and/or pattern that distinguish them from a normal or wild type ball python. An albino ball python is an excellent reference that comes to mind but there are some morphs that require a trained eye to identity such as the “Yellow belly” ball python for instance.