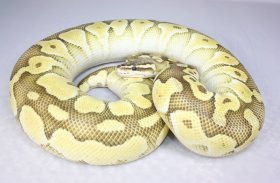 I have been out of town for several weeks, but now I am back! I should be able to keep it that way for several months, I hope. It seems as if every time I set myself to take a break some contracting opportunity opens up and I have to go back on the road. Truth be told, I would much rather stay home for a few months and set up for the upcoming breeding season. I have big plans this year, but I have to finish selling my animals from last before I concentrate my efforts on next year. I have not being able to sit for a few days and post ads on all the babies that are ready to go. Hopefully soon.

The girl in the picture above is a 2011 Pastel Lesser female that weighs an amazing 1875 grams, she and several other females from last year have managed to put on more than adequate weight to breed this season. I cannot say the same for every animal that I either bred or bought last year, there are some that are barely busting 650 grams. What can I say? You win some you loose some. Don't get me wrong, there is nothing wrong with a one year old ball python weighing 650 grams, I just like to grow mine fast. It is no ones fault, after all they are ball pythons and they will break your heart year after year! I hope everyone is gearing up for the season, good luck!