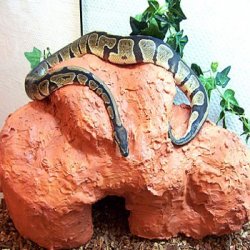 A couple weeks ago, my cousin got an adolescent Ball Python. In a rather unique situation, his older sister found it in a toilet while helping move her friend into a new apartment. They found the snake when they opened the toilet tank. Probably the previous owner tried to flush it before moving out, but the snake couldn’t get through the “S” curve, so it went for the tank. Any-who-ha, this was the first time I had handled a Ball Python, so I thought I’d spotlight them.

Python Regius, also known as the Ball Python or Royal Python, is native to Africa. They can be found from Senegal to Togo, and as far east as the Nile River in southern Sudan. In this region, they primarily live in grasslands, sparsely wooded areas, and savannas. They spend most of their time on the ground, but they are very good climbers. They feed primarily on small mammals in the wild.

Ball Pythons are very popular in the pet trade, presumably because they are the smallest of the African Pythons. Males average from 3.0 to 3.5 feet long, while females tend to be larger, generally from 4.0 to 4.5 feet long. Both genders have stocky bodies with proportionately small head. The head is flat on top and has a square jaw. The neck is smaller, but quickly broadens. The short tail has a blunt end. The scales are smooth, except for anal spurs on either side of the vent. They have a color pattern of dark brown, with asymmetrical splotches of brown or gold that are outlined in white and then black marking the sides and back. The underside is white, cream, or light grey, sometimes with random dark markings.

Adult Ball Pythons should be housed in at least a 40-gallon tank with an locking lid (emphasis on locking). Juveniles should have 10-20 gallon tanks. Suggested substrates include newspaper, shredded bark, or reptile carpeting. The tank will need sturdy branches for climbing, a dark hiding place large enough for the snake, a thermostat-controlled heating pad, and an incandescent bulb for basking. Because they are nocturnal, a red, blue, or black light should be used at night. The snake will also need a large water dish for soaking and drinking or a humidity hide (cavern full of moist sphagnum moss or other moisture-holding substrate).