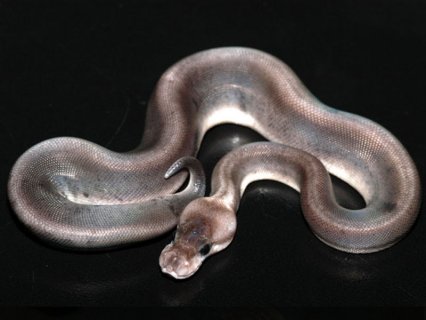 This female Pewter Banana was produced from a male Cinnamon line Super Pewter bred to my ch 8-4-2009 female Banana, (Will Slough line) and this little sweet heart gave me 5 eggs on May 21, 2011 at the ripe old age of 21 months. This clutch produced 3 pewters and 2 Pewter Bananas. The Pewter Banana will eventually darken like all Pewters do and in this case, it will be a huge bonus as more and more purple coloration will come to the surface making this the most purple ball python designer in existence, well that is until we take this to the next level, a purple patternless ball python in the form of a Banana Super Cinnamon, "Barny" Ball.