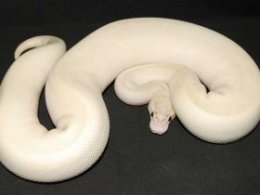 Homozygous for Amelanism, a recessive trait. The first of the designer Ball Pythons and the snake that started it all! So unusual they don't even look real until they move. Brilliant yellow blotches on white, although some strains may fade as adults. We are focusing on producing specimens with clean solid yellow markings.

A number of mutations, among them Mojave and Lesser Platinum, have proven to be allelic. Breeding any two of them together will create a 'Super' form which is a startling solid white to off-white snake with stunning blue eyes. The specimen illustrated here is heterozygous for Mojave and Lesser Platinum, two codominant traits. This combo is said to be one of the whitest forms. 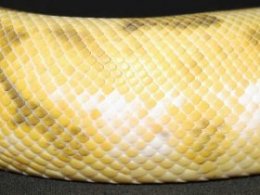 Heterozygous for Black Pastel, a codominant trait. Still another incomplete dominant mutation, with the super form being a unique solid blackish-brown snake known as the Black Ball or Eight-Ball. A number of interesting morphs have been produced using this mutation in combination with others, the most coveted of which is the Silver Streak Ball. Black Pastels bred to Cinnamons have produced Eight-Balls, so this trait is allelic to Cinnamon.

Heterozygous for Pastel and Black Pastel, two codominant traits. Combining these two mutations yields an interesting look, a near silver and black hatchling with the busy pattern of a Black Pastel. These are a key ingredient to producing the unbelievable Silver Streak Ball.

Heterozygous for Pastel, a codominant trait and Spider, a dominant trait. The combination of Spider and Pastel creates the incredibly popular Bumblebee. So named for the high-contrast black and yellow bands, they are gorgeous snakes, far better than either parent! Also an important genetic combination for use in creating even more beautiful snakes, such as the Spinner Bee and Killerbee.

Heterozygous for Calico, a dominant trait. Hatchlings of this morph are born with small white to pink speckles on the lower sides, similar to those found on Spider Balls. With growth, these thicken and become white in color. While not an extravagant mutation on it's own, it does some rather unique things when present in combination with other mutations, such as Pastel. Recently, claims have been made that 'super' forms have been produced, so perhaps it will prove itself as being codominant in nature.