Would you eat this Albino Burmese Python? 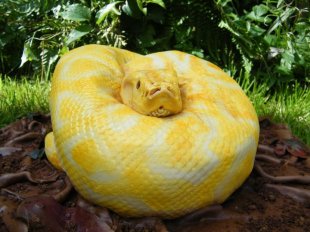 The photo of this Albino Burmese Python looks so real, Francesca Pitcher of North Star Cakes in Kent, U.K., was prompted to add this tagline: "****I DO NOT SELL SNAKES****. This photo is of a snake CAKE made to look like an Amelanistic Burmese Python for a birthday party."

According to the U.K. Daily Mail, Pitcher's now-6-year-old daughter, Claudia, who loves reptiles, wanted a spooky-themed birthday party. She wanted something that would scare her friends. Pitcher suggested a snake cake.

She regretted that idea immediately, and for good reason. Pitcher has a snake phobia.

From the U.K. Daily Mail:

'At first I couldn't even look at the images of them online but as I kept researching them I realised they weren't so bad and had quite beautiful patterns.

'Once I had got over my phobia I just cracked on with it...'

Over the course of three days, Pitcher spent 12 hours baking and shaping sponge layers, using "a white chocolate fondant with special dye to make the skin and replicate the distinctive markings of the dangerous snake, " according to the Daily Mail... (continued)
Source: www.sanctepater.com