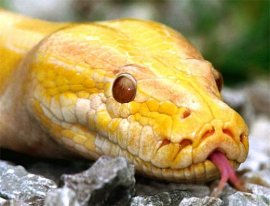 The largest subspecies of Indian python, and one of the 6 largest snakes in the world, the Burmese python has an average length of 12 feet (3.7 meters), but has been found at lengths of up to 19 feet (5.8 meters) and of course there have been many exaggerated claims.

Burmese pythons are rainforest dwellers that can live in trees (they use their prehensile tails to climb), on the ground, and near the water (they can submerge for over 30 minutes at a time), but as they grow in size, they tend to spend more and more time hiding in underbrush on the ground. From the underbrush, the Burmese python does its hunting, preying on birds and appropriately sized mammals ranging from rats all the way to deer. The predator snags its prey in its teeth, then wraps around it and constricts until it has suffocated and shattered the prey's body. 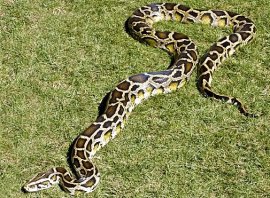 It then swallows the prey whole. During digestion, the python's entire digestive tract undergoes a massive increase in size, blood flow, and acidity. The snake then does almost nothing for lengthy periods of time (weeks, months, even more than a year) as it digests and enjoys the natural scenery and daydreams. The snakes are also believed to bruminate during winter, a reptile process similar to hibernation. 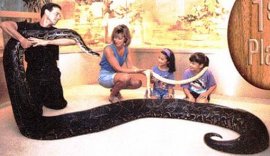 In recent years, an invasive population has become a problem in Florida (U.S.A.), as released and escaped pet pythons have flourished and become predators to many indigenous animal populations. When the smoke clears and the ecosystems rebalance in the swamps of Florida, nobody knows what changes will have resulted and which species will be remaining or dominating but the pythons will likely have made a big difference. 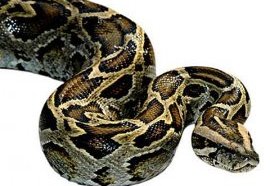 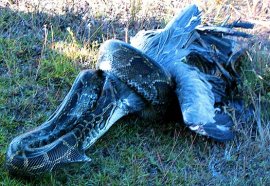 some of my recent snake pictures

Invasion of the Giant Pythons ~ Alligator vs. Python ...