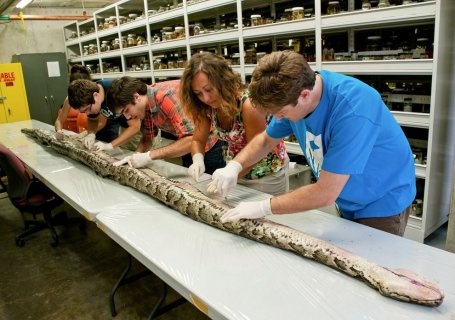 This could only have happened in Florida: 23-year-old Jason Leon spotted a python on the side of the road in the Everglades during an ATV trip with friends, and subsequently engaged in a 10-minute wrestling match with the snake before cutting its head off with a large knife.

Leon said he knew the snake "didn't belong" on the side of the road, and thus killed it out of sport. He later received a congratulatory email from the Florida Fish and Wildlife Conservation, impressed by his "big hunt." Leon agreed to donate the skeleton, but is keeping the snakeskin for his apartment wall.

Although, no one directly said that the snake's presence on the road was a genuine risk, Carli Segelson, a commission spokeswoman, told NBC Miami that "I would think a snake of that size could kill a very large animal...It could kill a deer, so a person would be comparable in size to that."

Giant Burmese python measuring 18ft could be the biggest ...