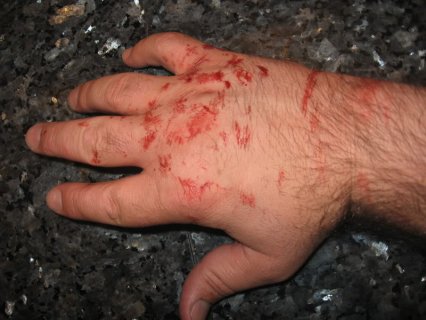 Nine species of introduced giant snakes could pose risks to U.S. ecosystems, according to a report recently released by the U.S. Geological Survey. The giant species now present in the U.S. are descended from imported pets that have been released outdoors. Already there are more than 10, 000 Burmese pythons reproducing in the wild in south Florida. Boa constrictors are also known to be reproducing in south Florida. The USGS says there's "strong evidence" that an African python may have a breeding population in Florida too.

Some snakes big enough to eat people
All nine potentially risky species are constrictors - nonpoisonous species that kill their prey by wrapping around them and squeezing until the prey can't breathe. The USGS report says that "most...would not be large enough to consider a person as suitable prey." But some of then are large enough to eat people, such as the reticulated python, which can grow longer than 26 feet. This python is the snake "most associated with unprovoked human fatalities in the wild." Reticulated pythons have been both sighted and captured in south Florida, but are not yet known to be breeding there.

Mature individuals of other species - Burmese python, northern and southern African pythons - have also been documented killing people in their native range, although unprovoked attacks are rare.

Invasive giant snakes threaten more states than Florida
Several species of giant snakes are considered more "high-risk species" for the U.S.than others because they
(1) tolerate cooler temps and could put larger areas of the U.S. mainland at risk - not just Florida
(2) are a major threat to native mammals and birds
(3) are common in the pet trade, hence likely to be released within the U.S.

Among these "high risk" species are the boa constrictors and yellow anacondas, which could breed north of Florida in areas with mild winters.

Above, our friend Jose Luis holding up an immature boa on his farm near Limon, Costa Rica.

Several species of anacondas have also been sighted or captured in south Florida. Anacondas can grow longer than 25 or 26 feet too, and I believe have been known to kill humans, although the USGS report didn't say that. I've read that the record length on an anaconda is 28 feet.

Deep in the jungle, we found a beheaded anaconda
Below are two anaconda pictures my son Alan took on a foray into the Amazon rainforest in 2008. We were slopping and tripping through a difficult swamp in an effort to spot hoatzins (birds) when we passed a family of indigenous Peruvians heading back toward the river, returning from a hunting/foraging trip. All of them, including grandma, were slogging barefoot through the most treacherous swamp I've ever experienced, having submerged 3" long thorns. (I stepped on two of those thorns; they went right through my rubber boots.) But the Peruvian family seemed unperturbed. The whole family had homemade packs on their backs, and one pack carried a chopped up anaconda they intended to eat. The head, as you see, they had left behind.

The head of an Amazonian anaconda, severed by an indigenous family hunting for food. Photos by Alan Kneidel.

Introduced snakes can devastate native wildlife
The USGS scientists who wrote the new report said that U.S. birds, mammals, and reptiles in areas of potential invasion have never been exposed to huge snakes before, snakes longer than 20 feet and weighing more than 200 pounds. Said Dr. Gordon Rodda, a USGS scientist, "Compounding the risk to native species and ecosystems is that these snakes mature early, produce large numbers of offspring, travel long distances, and have broad diets that allow them to eat most native birds and mammals." He also said that most of these snakes can live in a variety of habitats, including urban or suburban areas. Boa constrictors and northern African pythons are already thriving in metropolitan Miami.