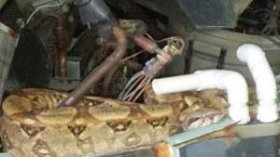 Last night CBS 6 told you about a red-tailed boa constrictor discovered in Chesterfield County. Today police recovered another super-sized serpent has been recovered, this one an albino Burmese python.

Authorities now believe that all reptiles are accounted for, and Rob Leinberger, with Animal Control said that “all evidence that we found so far led us to believe that there were probably two snakes.”

Animal control officers went door-to-door Wednesday morning, searching for the second snake after a boa constrictor was found coiled up Monday in the storage area at One Hour Heating and Air Conditioning.

The python was also recovered in the woods line off East Boundary road, actively roaming around. It was taken to a local exotic pet shop. 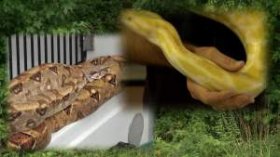 “It was probably man-handled the past couple of day, and she’s very nice, tongue coming out, she’s moving, she’s curious, she’s healthy—she’s like she is supposed to be, ” said Vinny Ferraiola, owner of the exotic pet store. “There is nothing evil about her.”

Officers said they did find evidence that the boa and python were released in a wooded area behind the complex. They’re now trying to figure out who owned the snakes.

The python will be housed there for the next month.

“We have to keep her for 30 days as evidence, other than that the market for this animal is huge, ” said Ferraiola. “She’s a pretty animal…probably breedable next year.”

Animal Control asks viewer to contact them if you know anyone that had two pet snakes, specifically a boa and python, and they no longer have them.

my reptiles boa and burmese python