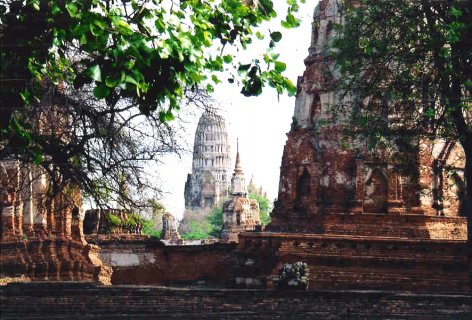 Gaps In The Maps?

Until recently, I never knew that there was a Buddhist tradition of map making. Did you? Well there was. Ancient Buddhist maps always showed either Mount Meru or Bodh Gaya in their centre. The most famous of these is the Gotenjiku Zu, Map of the Five Indias, drawn by the Japanese monk Juaki in 1364 (Sorry, I can't find a picture of it). This map is based on Hiuan Tsiang's account of his pilgrimage to India and indeed even marks his route with a red line. Mount Meru and Lake Anotatta with the traditional four rivers flowing out of it is shown in the centre, while Bodh Gaya is located towards the south-east. The purpose of the Gotenjiku Zu was didactic and scholarly rather than practical. This is clear from Juaki's own words. He said: "With prayers in my heart that Buddhism might prosper, I engaged myself in the task of making this copy, wiping my eyes which are dim with age, and feeling that I myself were actually traveling through India." A Japanese map from called Map of Jambudvipa from 1744 shows India in the centre of the world, China to its right, and a little further along, Japan.

A Burmese map of the world, also from 1833 shows the world as it is described in Pali commentarial literature.
However, route maps meant to be used by those going to India on pilgrimage did exist too. These were probably not available for ordinary pilgrims but were made by and for royal embassies. One of the few such maps that survives, from northern Thailand, was drawn in the 19th century although based on a much earlier prototype, probably by someone who had actually been to India. The map shows important pilgrimage sites like Rajagaha, Kusinara, Campa and Dona's stupa, and gives their direction and the number of days needed to reach them from the Mahabodhi Temple, which is depicted in the centre of the map.