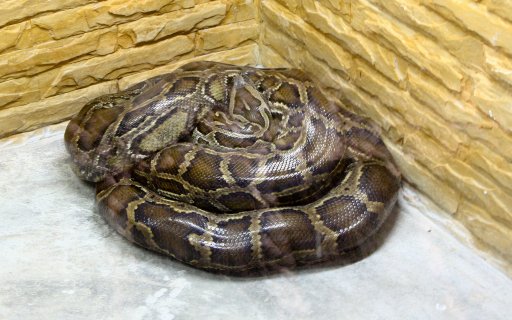 The Burmese python, Python molorus bivittarus, is native to much of Southeast Asia, including the country of Myanmar (formerly Burma). It can be found in Laos, Vietnam, Cambodia, Thailand, parts of Southern China, Northern India, and Nepal, and even across the Malacca Straits into the Indonesian archipelago.

The Burmese python is a favored pet of quite literally tens of thousands of snake fanciers in the US. Until recently, several thousand were imported into the US every year for hobbyists. Now, because the python population in its natural geographic boundaries of Asia has been threatened by overexploitation for export, many are raised within this country by the pet trade for resale to novice owners.

But the Burmese python is also a nightmare for many conservationists who fear that it will upset the balance of nature wherever else it goes.

What Makes this Snake So Popular Among Collectors?

This snake has an attractively patterned skin. Indeed, shoes and fashion accessories commonly used to be made using their skins and were a sign of affluence and high social status among wealthy urban women in the US and Europe.

The snake also allows for bragging rights among its largely male pet owners. It is one of the top ten snakes in size and weight. It can grow multiple feet in a year, and indeed it continues to grow for as long as it lives. It is by no means unusual to find year-old specimens that are several feet long that weigh in at more than 80 pounds. Adult specimens in the range of twenty feet and well over 200 pounds are not that rare in either the wild or in captivity. (The champion for size and weight appears to have been a 27 foot snake that lived in a zoo, weighing in at over 400 pounds).

While the snake is not thought to be particularly aggressive in the wild, in captivity, it tends to feed more often than other large snakes (although it can also go periods as long as a year without feeding). These instances of prey capture and devouring can provide a peculiar, if somewhat sadistic to some tastes, sort of entertainment for lovers of large snakes as pets. (The highly adaptive digestive physiology of these particular pythons is among the most studied in the world, because of its inclusion of rapid organ shrinkage and expansion, depending on the size or abundance of game or its lack.

What Makes this Python so Scary to the Rest of Us?

While not a poisonous snake, this python is a particularly effective hunter-killer. It grasps its prey with a mouth full of very sharp backward facing teeth, from which the prey can only escape by cutting itself severely during the attempt. Once the victim is trapped by these teeth, the python then whips its very muscular body around the unfortunate prey’s midsection. Once encoiled, the prey is squeezed so tight that it cannot breathe. Indeed crushed rib-cages are common among victims of a python attack. Pythons have tremendous strength, and while it is a very rare occurrence, they can kill adult humans whose size and weight approximates their own, and perhaps even humans who are a little larger than they are. The deaths of small children through python attacks are still rare, but more common.